There are no upcoming events at this time

Queenstown-based Turn Up The Music Trust presents “The Lunatics" a band of young NZ'ers all living with Tourette Syndrome who gain respite from their tics through music and performance.On stage […]

Queenstown based Turn Up The Music Trust, is delighted to welcome internationally acclaimed violinist Natalia Lomeiko to perform at the intimate concert space of Thomas L. Brown Gallery. Natalia has […]

Find out more »
Rozzie & The Orchestra

Find out more »
Songs of the Wakatipu Youth songwriting completion

Come along and support your musical mates at Wakatipu High School 5.30-7.30 pm Friday 16th of October.There will be awesome songs and prizes for the top songwriting winners, including a […]

Turn Up The Music, feels privileged to have Jackie Bristow International singer-songwriter, tutoring these songwriting workshops and being an inspiration to our young Queenstown songwriters.Sign up quick, as spots are […]

Find out more »
Meet the teacher – Try an instrument

Meet the teacher – Try an instrument

An opportunity for all primary school children to listen to people playing music, try out some instruments and choose one they would like to learn.

We feel very privileged to have Jackie headlining this concert and being an inspiration to our own aspiring young QT stars.She has opened for stars like Chris Isaak, Boz Skaggs, […]

In this free concert, the music teachers from Queenstown based Turn Up The Music School will showcase a selection of music for the whole family from Classical to Jazz and […]

On 31 August the rare sound of a symphony orchestra will fill the Wakatipu High School’s Theatre. For the first time the Dunedin Symphony Orchestra (DSO) will be performing in […]

On 17 May 2019, a string quartet featuring Benjamin Baker, Justine Cormack, Gillian Ansell and Alexander Hersh performed compositions by Franz Schubert and Gareth Farr at Arrowtown, Shotover, and Queenstown Primary schools. Garth Farr was in attendance too, and spoke about his Mondo Rondo composition.

The following night, the string quartet performed at the launch of the Trust, at Hakitekura, Queenstown.  The set also included a composition by Felix Mendelssohn, followed by a Tchaikovsky encore.

Benjamin Baker took the opportunity to announce the launch of Chamber Music at the World’s Edge.  The aim is to bring chamber music events to the people of Central Otago on a regular and planned basis.

One of the highlights of the launch was a performance by precocious saxophonist Eliott Allemand, a graduate of the Lakes Community Music School.  Eliott showcased the potential of Turn Up the Music’s programme and its music school. 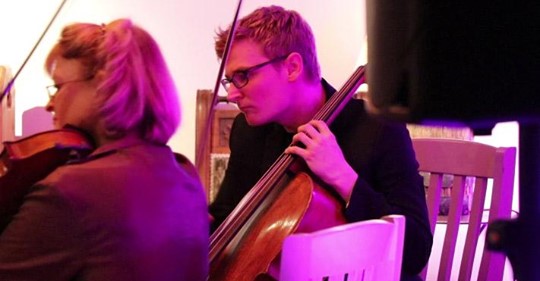